Learning from an Unexpected Flight into Icy Conditions

There are two things I avoid like the plague when it comes to instrument flying and instrument cross countries:  ice and thunderstorms. With nearly 3000 hours and a commercial instrument rating for multi-engine aircraft, I understand my limitations and the limitations of the aircraft I am flying which is probably the most sage advice I could give to any new pilots or new aircraft owners. It amazes me to see accident reports that involve relatively inexperienced pilots, sometimes with an instrument rating, push ahead into weather that has the potential for damaging thunderstorms or a high risk of icing. Many of these can be avoided by just waiting!  On those rare occasions, when despite the best planning and the most detailed briefing we can still enter into unexpected situations during a flight, we must take the appropriate actions to continue safely. I experienced this personally on the leg of a recently planned trip from Pensacola, Florida (KPNS) to Vicksburg, Mississippi (KVKS). 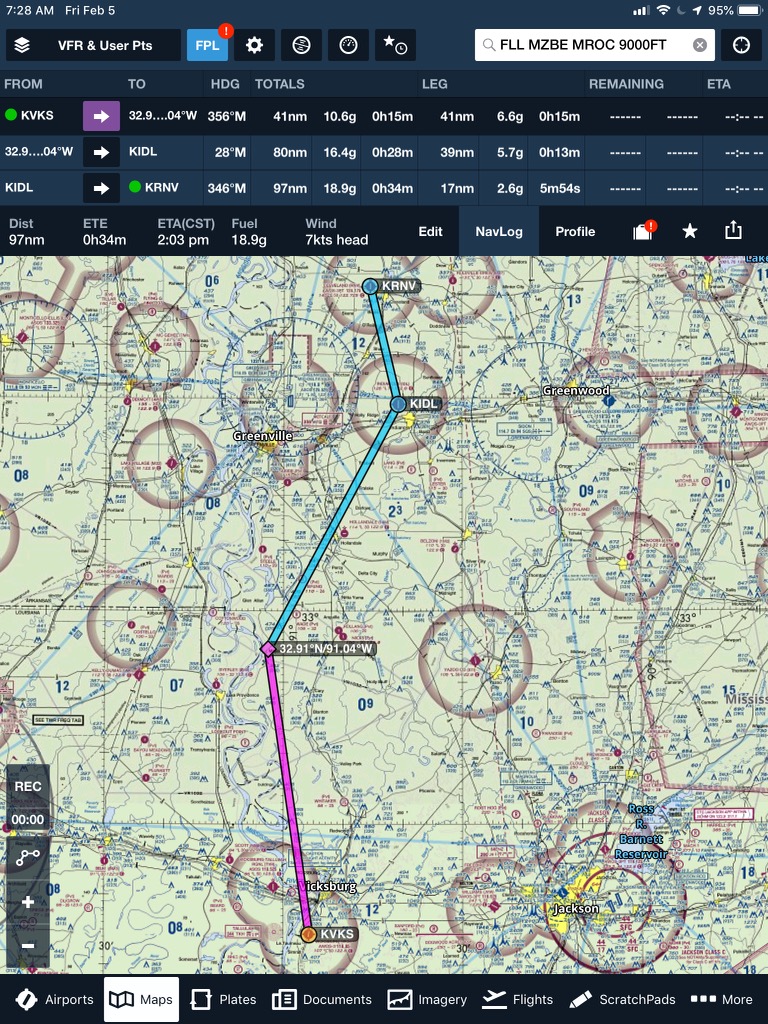 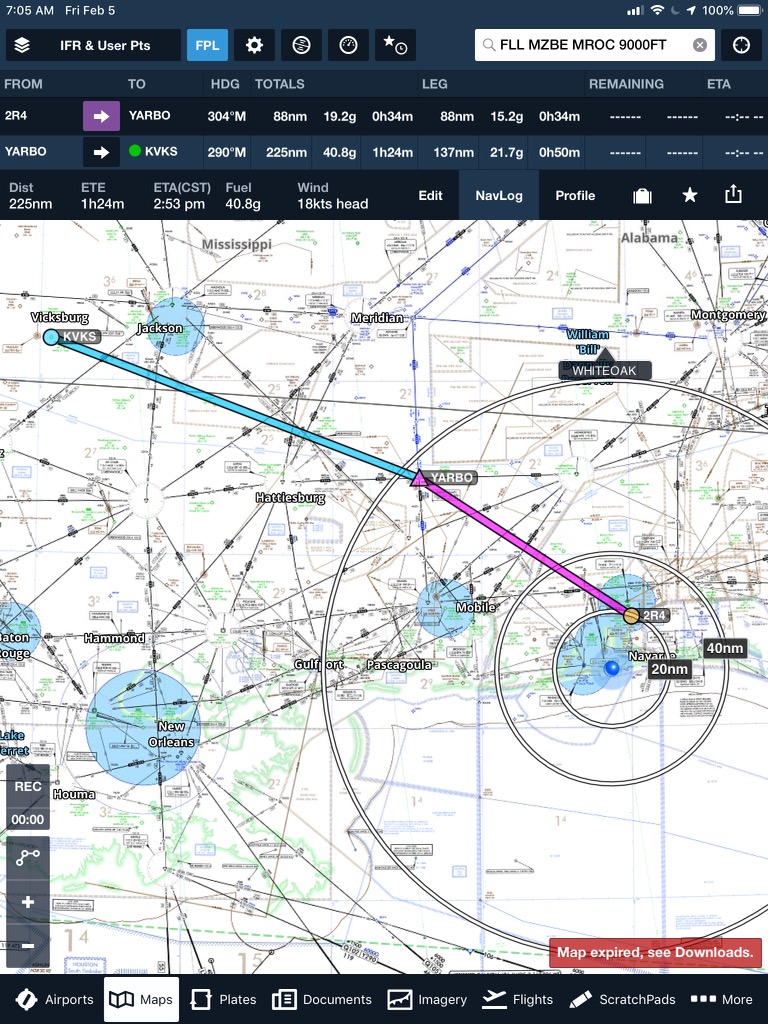 Our friend and partner Josh Flowers of Aviation101 joined us in Pensacola for a briefing at Pensacola Air Flight School, prior to our planned departure for a fun-filled weekend flying the Blues Trail – with the journey kicking off in Vicksburg, Mississippi and ending in Memphis, Tennessee where we’d all part ways. We knew the weekend was going to be an exciting adventure, but we didn’t know that we’d have the opportunity to deal with just about every weather situation along the way. The briefing for the weekend was essentially VFR once we left Pensacola, but as we would learn, the weather changed several times, requiring us to make a number of adjustments. As we briefed that morning for a noon departure, we were expecting 1200 BKN to OVC out of Pensacola and filed an IFR flight plan. Josh’s Cessna 172 was at KPNS, while my Baron was a short drive away at Milton (2R4), so we planned for Josh to depart at noon with my departure at 12:30 from 2R4 essentially putting our arrival into Vicksburg at the same time. The cold front had already passed Pensacola so the risk of thunderstorms wasn’t in the forecast. We expected that temperatures would be dropping, and anticipated some light to moderate turbulence immediately behind the front. Freezing levels were forecast at 9000 feet and above, with no moisture included in any of the TAF’s along our route of flight. The TAF’s west of Pensacola were all forecasting VFR with BKN to SCT ceilings, once we roughly reached Mobile, AL on our route of flight.

With the briefing complete and our plan set, we headed towards our respective airplanes for departure. In my haste to get to the airplane, I made the thirty minute drive to Milton, leaving my backpack at PNS (dummy)!

Yep, iPad, ForeFlight, Stratus and everything else I would use on a complex instrument cross country left behind!

Two members of the Coflyt team, Pace and Kyler, were riding with me, and Josh had his friend Chelsea with him. We were filming out of the Baron, and of course, Josh is always filming for Aviation101. (You’ll be able to see some of this story on his YouTube channel in the coming weeks!) I obtained my clearance and IFR Release on the ground at 2R4 from Pensacola Approach and took off, heading South then West per my release instructions. All went according to  plan for the first 30 minutes of the flight. Once we were about 20 miles northwest of Mobile, I began to notice that we were in the clouds and IMC much more so than was expected, based on the forecasts. YARBO is a fix in this area and is generally used to avoid several MOA’s. We were on course direct to YARBO, then we would be direct to KVKS. Since we were in IMC much of the time, I was regularly checking my OAT gauge to assure we were not moving into freezing temperatures. At 8000 feet our outside air temperature was 50 degrees Fahrenheit as we flew near Mobile, but then it started moving down, settling around 45 degrees. As we hit YARBO and began our westward turn, things started to quickly degrade.

We were still in the clouds, but now we started seeing snow and some sleet at our altitude. As it suddenly became heavier, I immediately became concerned that this would start sticking to the Baron. My OAT was still showing above freezing, but it was definitely coming down. I expected cooler temperatures as we went west, but did not expect freezing temperatures and certainly not the heavy moisture we found ourselves flying through. I Immediately requested a descent from Memphis Center to 6000;  Me: “Memphis Center, Baron 3622A we are beginning to pick up freezing precipitation and request a descent to 6000”.  Memphis Center: “Standby for that clearance”.  Me after a short few minutes with the precipitation getting worse and no clearance:  “Memphis Center Baron 3622A I need an immediate descent due to icing”, as I started down. Memphis Center: “Baron 3622A cleared to 6000”.

Were we at risk of picking up icing on the aircraft? Maybe so, although it could have been that the skin of the aircraft was above freezing, so it may not have been a risk. But I wasn’t planning to find out and was much more comfortable moving into warmer air with the hope of minimizing the risk further, if the possibility was there.

My Baron has Pitot Heat and deicing on the prop, but it is rarely needed and never used, so I treat my aircraft and planning as if I didn’t have either.

At 6000, we continued for another 10 or 15 minutes, but it quickly became apparent that the moisture was going to be even more consistent and heavier than we’d thought just a few minutes earlier. Memphis Center was communicating to other aircraft in the area that there were areas of moderate to heavy precipitation along our route of flight. About this time we entered one of these areas, and it was once again heavy snow mixed with other types of freezing precipitation. I couldn’t believe the weather brief had missed so badly from what we were confronting. In another attempt to minimize the risk, I immediately requested a descent to 4000 which was, thankfully, promptly granted by Memphis Center. I was reluctant to go that low, 4000 being a less efficient altitude for the Baron. I also knew descending to that altitude was going to be much rougher on my two passengers. Choosing the best of really no great options, we headed down to 4000.

Once we got to 4000, the turbulence increased dramatically, and we were tossed around in the Baron. As we were being shaken up, my thoughts turned to Josh in his 172, as his planned altitude was 4000.  He and Chelsea had to be taking a beating as they were also trying to avoid the moisture. Around this time my passengers were able to get a cell signal and check Flightaware and were able to confirm that Josh was still in the air, though behind us after heading North in an attempt to avoid the moisture.

Back in the Baron as we were being bounced around at 4000 feet, we were still picking up frozen precipitation! We couldn’t go lower, so I began asking for vectors around the heavier precipitation from Memphis Center, and we were turned north towards Jackson, Mississippi. As we got closer to JAN, the weather finally started clearing to the west, and we turned direct to Vicksburg. Now clear of the clouds, snow and ice my passengers finally started to relax!

As we entered the pattern at Vicksburg, we had beautiful VFR conditions with variable winds.  Josh went from 30 minutes and 15 miles ahead of us on launch to 15 minutes behind us on arrival. He does an excellent job flying the 172 in IMC conditions without an auto-pilot (!!), but I was glad I was not in Cessna with him through all of that! The Baron was stable and sturdy throughout the unexpected ordeal, and there’s no other plane I would rather be in when encountering unexpected conditions like the ones we’d just flown through.

It was great to get back on solid terrain, and I had a few people with me who were ready to kiss the ground! One of my passengers was slightly green from all the turbulence, but hopped right back in for the next VFR leg north to Cleveland, MS.

We will cover more of the details for the remainder of the Mississippi Blues Trail trip in another blog. This leg deserved special attention, and I hope others can learn from our experience. Though we don’t go looking for them, these in-flight challenges are all a part of what makes flying such an amazing and challenging experience. One thing that always helps is confidence in your aircraft, and you can build confidence through real-time challenges like those we experienced during this leg of our adventure. You can also build confidence by using Coflyt to fully understand the airworthiness before you fly. This is one of the ways we hope to help you manage your aircraft so you can enjoy flying with #PilotPeaceOfMind! 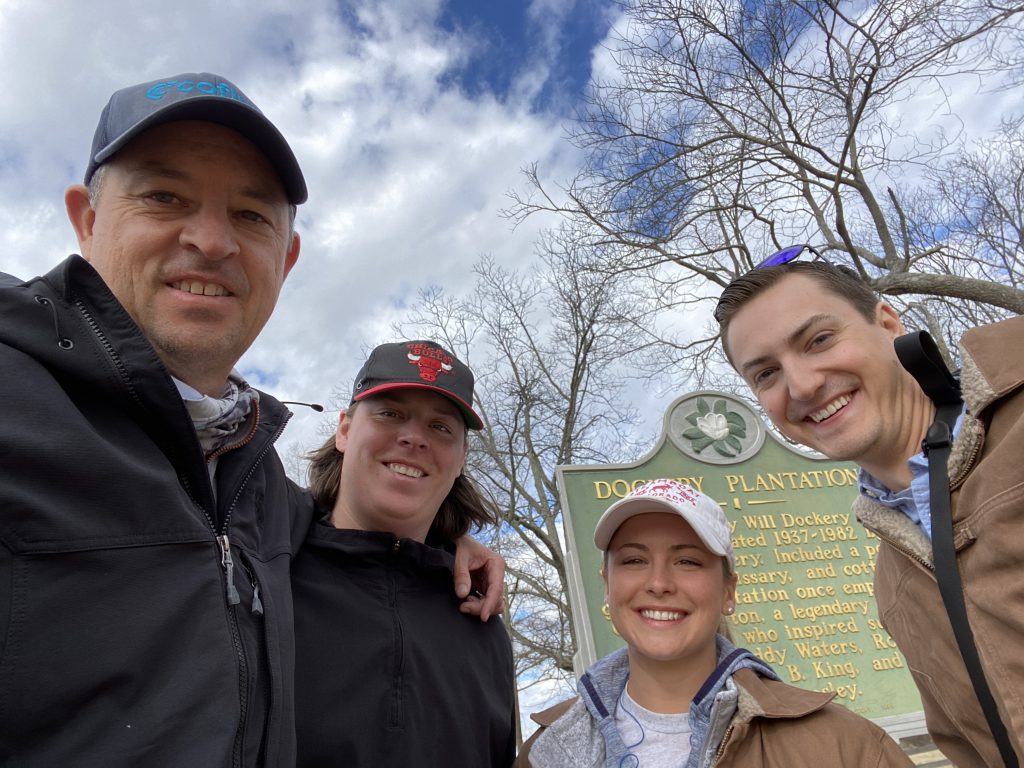