Trust Your Gut & Fly Safely – Even Under Pressure

Once we are certified as IFR pilots, we gain greater access to the sky and even more flexibility in terms of when we can travel, along with an increase in the amount of information that must be processed each time we do make that ‘Go, No-Go’ decision. Our comfort level can actually – and probably should – change depending on our recency of experience as we go through our life as pilots. I recently had a flight crunched on both ends by weather while at the same time, commitments to others were also driving my sense of urgency.

On a Monday morning not too long ago, I was scheduled to be at Mississippi State University for meetings that were scheduled to start in the early afternoon, so I planned for an IFR flight from 2R4 to KSTF. As I was planning the day before I was departing, I noticed a cold front that would be moving through the area mid-day, so I knew it would be best to get an early start. So I filed for a 0700 CST departure from 2R4, comfortable that there wouldn’t be a weather issue, and that I’d arrive early into KSTF. Early Monday morning before making my drive to the airport, I checked Coflyt to confirm my Baron’s readiness and fuel onboard before logging in to ForeFlight for the latest weather briefing.

As is so often the case with weather – especially in Florida– things had changed! Whiting Field, just north of 2R4, was showing LIFR due to fog, with a TAF that showed the fog was expected to hold in place till possibly 0900 CST. All of a sudden, my plan for an early departure to beat the cold front moving towards Starkville, Mississippi had become more complicated. I decided to head to the airport and top off with fuel so I’d be ready to go once the fog lifted. I was still hoping to take off early enough to make it to KSTF ahead of the squall line associated with the cold front. 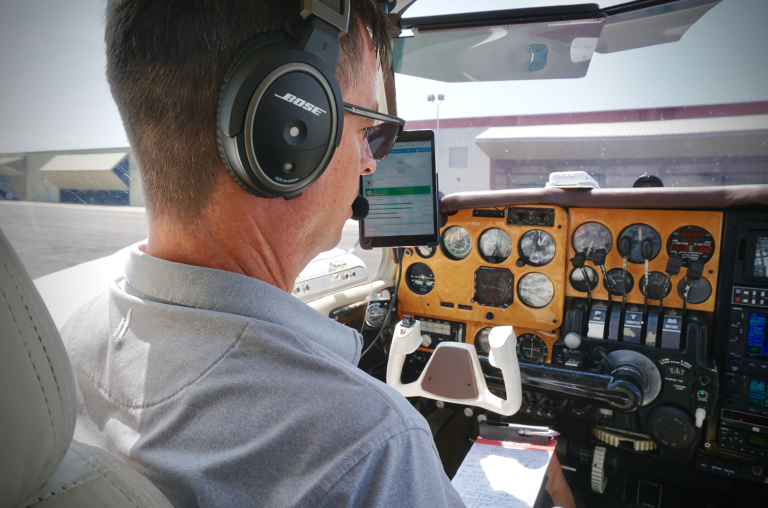 Upon my arrival at 2R4, I confirmed the visibility truly was less than ¼ mile, with heavy fog still in place. It was becoming clear that I was not going to make it out by 0700 CST, as I’d filed. While waiting for the fog to lift, I pre-flighted, fueled up, completed a run up and shut back down. So what, exactly, did I need to go wheels up from a weather perspective? There have been times throughout my long flying career that I have been completely comfortable with an IFR take-off and departure with vis down to ¼ mile.

But, while I am both comfortable and proficient with my current IFR skills, my personal comfort level with this type of departure just isn’t there these days. So what’s the deal?

I prefer to know that I will have a place to land, if I depart and for some reason need to come back. The RNAV 36 approach back into Peter Prince Field Airport with a local altimeter setting is 580 – 13/8. My personal minimum to depart 2R4. Because it’s my local airport, I also know this means I can sit on the numbers for take off 36 and clearly see the trees at the end of the runway. And so far that day, I wasn’t there. I couldn’t even see halfway down the runway by this point. Pensacola (KPNS) is the Class C space overhead, so it is realistic to also consider KPNS as an alternate departure, using the ILS 17 with minimums of 321 – ½. But unfortunately the weather conditions at the time made that option questionable as well.

As time ticked by, it became obvious that I was not going to lift off by 0830 CST, so I cancelled my existing IFR flight plan and continued to wait out the weather. I planned to file again once I had more certainty about when I could depart. All the while, I was watching the cold front approaching KSTF with severe weather. It quickly became apparent that if I wasn’t off by 0900 CST, I wouldn’t be able to get into Starkville ahead of the front. This put pressure on me to depart as soon as possible due to both the timing of the front and the scheduled meetings that I needed to make. At about 0845 CST, the sun finally started to break through and the fog gradually began to lift. I could finally see the trees at the end of the runway, with ceilings lifting to 600’ – it was time to load up and go!

Once I taxied out to depart using runway 18, I called up Pensacola approach for my departure clearance. Things were looking good as I departed Runway 18, maintained runway heading, climbed to 3000’, expecting 8000’ 10 minutes after departure. The climb out was smooth and by the time I reached 1000 feet, I was clear on top and was instructed to proceed as filed to KSTF. It felt good to get going, but now I had to meet my next objective:  beat the cold front headed to Starkville! 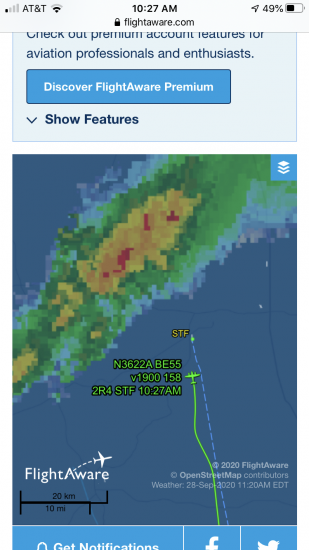 Since I wanted to make the best time possible, I set 75% power at 8000 feet and began watching my ADS B in radar for the one hour and fifteen minute flight. It was going to be close, the line of storms was rolling in about 45 miles to the west of Starkville and was moving pretty fast. As I was enroute, Starkville went from MVFR to IFR, with 900 BKN as the ceiling. My initial plan was to shoot the RNAV 18 approach, which was the best choice for winds, but as I considered my options I realized the RNAV 36 might be the best option for other reasons. RNAV 18, was going to require that I fly north of the airport, then come back south, extending my flight by 15 minutes, while bringing me closer to the squall line north of the field. Because my ultimate objective was to get safely on the ground as quickly as possible, RNAV 36, which had me circle to land was my best option. The minimums were 900 feet for the circle and ATIS reported that the ceiling had lifted slightly to 1000 OVC, which meant this would work.

Columbus Approach threw another hurdle my way, giving me a late descent, meaning that I needed a descent rate that was more than I would like in IMC to get to the FAF altitude. Ultimately, I hit the FAF on altitude, dropped the gear, added one notch of flaps and followed the glide path down. As I passed through 1000 feet, I picked up the field and began a turn for a downwind to 18. The winds were gusty with the storm approaching, but after a solid landing I taxied to the ramp for a quick tie down. It was close, but I made it just in time, the first sprinkles starting to fall as I was tying down.

As you’d expect after a challenging flight, it was fulfilling to complete and as I went through my mental debrief, I was pleased with my decision making process throughout both planning and during the flight. It would have been easy to push an earlier take off, but would have exceeded my comfort level with the low visibility conditions – something I do my best to avoid. Luckily, I had a good ‘Go No-Go’ time and by sticking to it, I created a safe environment for myself and ensured I safely met the objectives of the trip.